Tubqal Pro is a multi-script typeface based on its previous Tubqal typeface commissioned by the Khatt Foundation as part of the Typographic Matchmaking in the Maghrib 3.0, the 3rd edition of the multi-script typographic research project of the Khatt Foundation. The goals of the Typographic Matchmaking projects are to nurture cultural dialogue and help develop local design skills. In this case, Tubqal, as a multi-script typeface includes Tifinagh, Maghribi-based Arabic and Latin in order to provide a real type cultural dialogue in the Maghrib region.

As stated by curator Huda Smitshuijzen-AbiFares in Khatt website presentation “In its third edition entitled Typographic Matchmaking in the Maghrib, a group of European (Dutch, Spanish, French) and Arab (Lebanese, Moroccan, Tunisian) designers will research and develop tri-script font families that combine Arabic, Tifinagh and Latin scripts harmoniously. Both the Maghribi and the Tifinagh scripts have not been fully explored in contemporary digital fonts, though they harbor a wealth of aesthetic variety and expressive potential.” The project was sponsored by several public and private institutions.

It all started in September 2015, when we travelled to Marrakech for a type workshop and a practice-based research on Tifinagh and Arabic Maghibi style. In the first stage of the process we worked together as a whole team until we started to develope our own ideas to fulfil different goals along the process. The ‘Tubqal team’ was formed by Salah Bellizi, Juan Luis Blanco and Andreu Balius. The curators of the project, Huda Smitshuijzen-AbiFares and Brahim Boucheikha, provided all support and freedom for the development of the project. In following stages, we also travelled to Granada, Córdoba (Spain) and Montalba-le-Château (France) for inspiration, research retreats and team working sessions before the final presentation was held in Amsterdam, in September 2016.

Our team was conscious of the urgent need of a text typeface that would support all three scripts (Maghribi-Arabic, Tifinagh together with Latin). Our visit at IRCAM (Institut Royal de la Culture Amazighe) in Rabat, confirmed the need for digital fonts in Tifinagh. Moreover, the urgent need for multi-script fonts in the area.

At the time this project started, there was not a single font that would include all three scripts together. Different road signs and improvised hand lettering signs demonstrated a social communication need for a solution that should come from the type design expertise. Education material was poor and in lack of proper design tools, too.

Tubqal is named after the highest peak on the Morrocan Atlas mountain range. It is intended for text purposes. Tubqal Arabic is based on Maghribi Mabsout. An Arabic sub-style used for Qur’an and extensive reading texts. Its main features are the low contrast and the similarities with Kufic in terms of regularity and stiffness. Anyway, the result was supposed to achieve a modern interpretation of this particular style.

Since the project was initiated in Morocco, we considered that the approach to both Latin and Tifinagh should depart from (and be influenced by) the Maghribi Mabsout style, taking into account the right-to-left Arabic writting direction.

Calligraphy was the starting point in order to get familiar with the Qalam when writting and some awareness with the script itself. Also, observing every single detail as a result of the movement of the tool and the breath of any gesture that would become the source of inspiration for any specific feature within the typeface design. 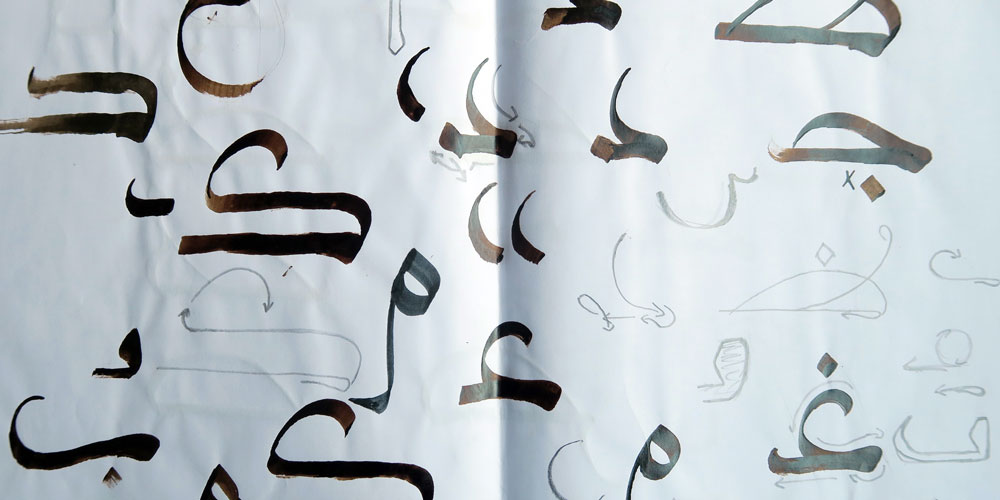 The structure of letters, more close to Kufic stiffness than to dynamic Naskh, were studied carefully in order to find connections with the other scripts, Latin and Tifinagh. Tracing on paper, both writting and drawing, was the way we choose to start working on the design of several basic letter shapes that would help to raise a design idea. The frequent rounded loop at top of alef was one of the first sources to experiment with some Latin letters. Asking questions such as, ‘how would calligraphers write Latin script if they had to practice from right to left, instead?’ were paramount in order to realise new possibilities and therefore look at Latin script from a ‘tabula rasa’, something to unlearn and be observed from a new perspective. That was really an interesting experience, indeed.

The main goal was to obtain harmony and unity among the three scripts respecting their own idiosyncrasy. The overall idea was to achieve some sort of dialogue among the scripts without merging or submitting any of them to a particular one. Of course, as I have already mentioned, Maghribi Arabic was the source for inspiration. Nevertheless, no proportions nor structure were sacrified for the sake of unity.

Tifinagh has a rigid structure, that could be compared with the rigid Latin uppercase. Latin script has both the rigid of the uppercase and the dynamism of lowercase, that is more frequent in text composition. Arabic, on the other side, is cursive by nature and more dynamic in comparison with the other two scripts. Nevertheless, Maghribi Arabic, that is closer to rigid Kufic styles, offers a not so calligraphic feeling and keeps its look a bit more closer to the Latin lowercase.

Taking this into account, the estructural similarity between Latin uppercase and Tifinagh was quite apparent and visual connections betwen Arabic and Latin lowercase were not so evident but seemed easier to make. 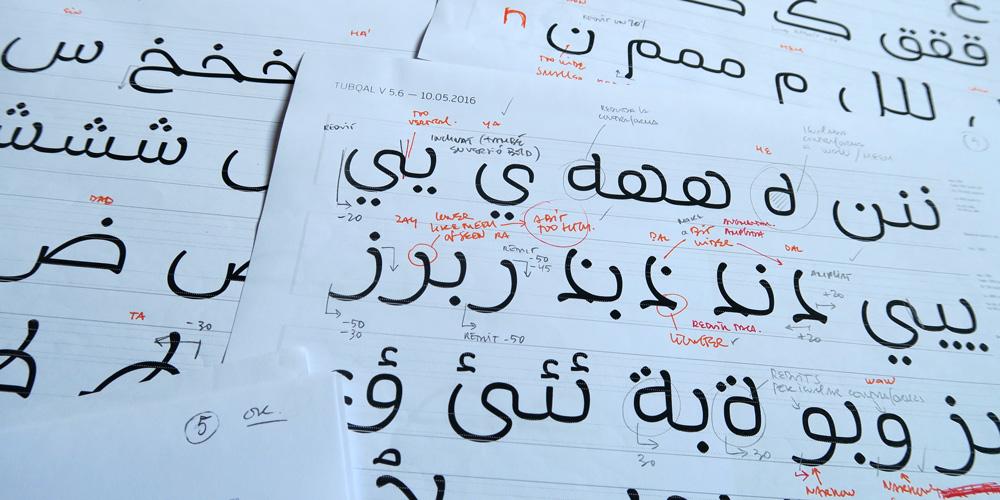 All three members of the Tubqal team, discussed and shared background knowledge about our own typographic and calligraphic traditions so as to enrich both the process of work and the results. Salah was a good connoisseur of Maghribi calligraphic tradition and that was of great help when understanding the process of writting letters in the Mabsout sub-style, during the early stages of the project.

Tubqal was finished as a basic family (light, regular and bold) in September 2016. It was conceived as a text typeface and includes the three mentioned scripts. It is intended to be licensed for free from the Khatt Foundation in order to carry out with its original goal: to provide a multi-script typeface that could contribute to improve visual communication in the Maghrib area.

In spring 2019, Andreu Balius together with Juan Luis Blanco decided to enlarge the Tubqal family with more styles. Instead of the regular inverted axis of standard Tubqal, Tubqal Pro has a redesigned Latin character set more suitable for left-to-right text composition. Also, the inclusion of italics for both Latin and Tifinagh makes the font more complete and useful for our western design standards. So, Tubqal Pro attemps to provide some sort of consciousness about the need for Tifinagh and Maghribi-Arabic style typefaces and, at the same time, be a useful design tool for text composition.

Tubqal Pro is being licensed at a reasonable price for all those who want to use it from TypeRepublic and BlancoLetters. Moreover, a Tifinagh solo version will be delivered for free in order to promote Amazigh culture and nurture Amazigh people with type tools for the social development of their written culture.

Tubqal Pro is designed by Juan Luis Blanco and Andreu Balius and is being licensed at a reasonable price for all those who want to use it from TypeRepublic and BlancoLetters.

If you find any problem, please drop us a line