For a long time now I have been collecting the printed wrapping papers that are popular with many Spanish butchers. These are special paraffin wax papers used to wrap hamburgers, sausages, chicken, steaks, and any other sort of meat. These papers have a double function: to protect the meat on its journey from the butcher’s to your refrigerator and as a space for the butcher to advertise their services – often in the form of what we might describe as attractive non-professional graphic design. Every butcher has his or her own ‘corporate’ paper which carries the name of their business, some basic details of the shop (telephone number and address), and sometimes information about special offers. Most of the time the text is accompanied with illustrations or graphic artwork. It is a very particular local sample of graphic design ephemera, where both type and illustration play an important role. The graphic art of these wrappings includes references to popular culture such as naive illustrations of happy animals dancing in the countryside or pigs working as sausage delivery drivers. Most of the papers are 38 x 27 cm, with some larger sizes - usually 38 x 54 cm. Sometimes the design is printed twice on each paper.

Traditionally pork has been the most commonly eaten meat of the Iberian peninsula, and Iberian ham, sausages and other pork products have long been an important part of Spanish gastronomy. Despite several centuries of muslim rule: ‘Pigs’ meat made up generally the greater part of the domestic banquets’. The art of salting meat to preserve it for long periods of time was a common practice in Spain from ancient times. Meat, fish, and cheese, were preserved in oil, salt and spices. These ways of preparing and preserving food were learned from the Greeks and Romans, whose influence is also seen in the language of Spanish food.

Preserving meat for winter is especially common in mountainous areas. From October to December there used to be a popular festival in villages when the pig was sacrificed and every one in the family helped to prepare sausages, salted meat and other specials to be consumed during the harsh winter months. The importance of the pig in Spanish culture is reflected in the design of butcher’s wrappers, most of which feature pigs rather than other animals, although there are occasional cows, lambs, and chickens.

Most of the wrappers are printed in red – of course red can symbolise danger, and in food is often associated with spice, but in this case red is synonymous with fresh blood and therefore with fresh meat. Usually the wrappers are printed in one colour only, for reasons of economy, and occasionally two. Special inks are used which are safe to use with food and which follow the standards for EC regulations on printing inks for food packaging. 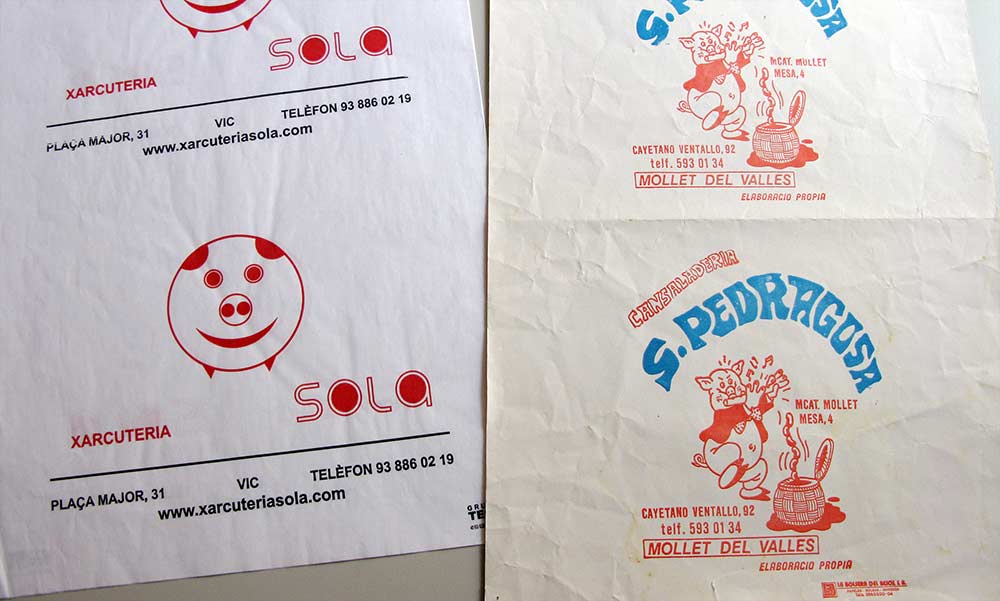 A variety of lettering and typography communicate the idiosyncrasy of the butcher. Calligraphic lettering is frequently used to express an artisan way of conceiving the job — we cannot forget that the art of the Charcuterie comes from the Middle ages. Blackletter reflects both the mediaeval traditions of the trade and the harshness of the craft itself, while script faces give us a feeling of delicacy. Roman letters communicate an elegant way to serve the client and bold sans serifs give a sense of a solid and reliable service. Helvetica is widely used as a ‘default’ typeface on butcher’s products. Of course Helvetica works well when informing ‘loudly’ on butcher’s specials and also seems to combine pretty well with illustrations of cannibal pigs!. Considering this frequent use of Helvetica (together with other common sans serif typefaces) in a more serious way, it was partly due to the limited number of typefaces available at the few printing offices which specialized in printing on wax papers and because sans serifs were technically more appropriate when printing on those papers.

We also find lots of butchers using display typefaces as a way to promote their business including well known designs by Roger Excoffon and Aldo Novarese as well as some unusual meaty examples. In some cases several display typefaces are used in the same wrapping paper in order to communicate the variety of specials they can offer the customer. Many of these fonts were popular choices from the Letraset dry-transfer lettering catalogues during the 1980s and early 1990s. The use of Letraset is one indication that wrapper designs tend to be amateur productions – most of the time there is no professional graphic designer involved. There are handmade attempts at lettering where unexperienced local ‘wannabe’ designers try to do their best at doing a nice piece. Sometimes, the design comes from the ‘art department’ at the local printing office, or from butcher’s young relatives. In most cases there is no budget for professional design. 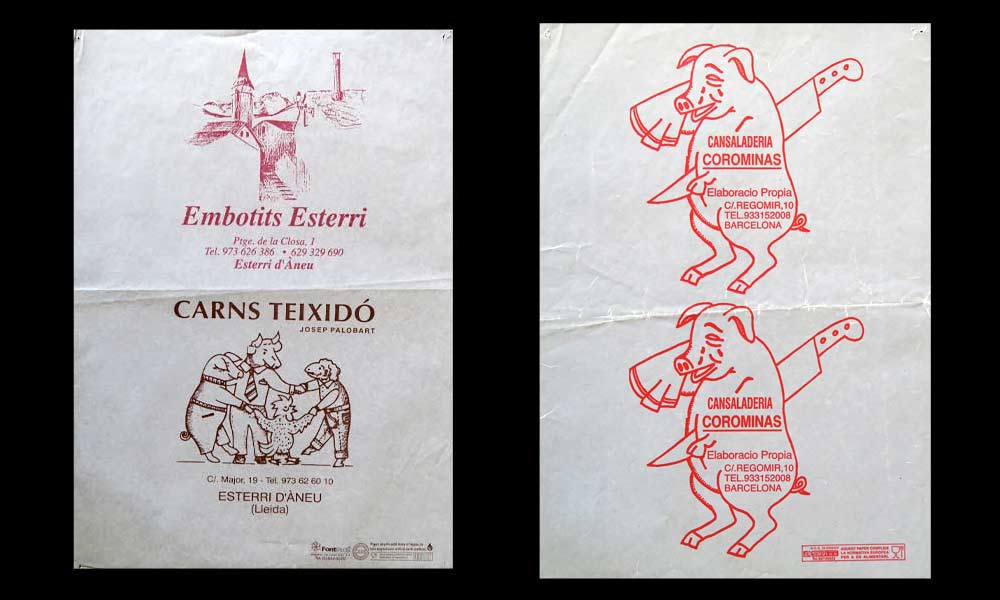 Looking at the examples shown here it seems that expressing some positive mood on the killing of animals is part of a butcher’s strategy when communicating their business using these wrapping papers. I wonder where this tradition of comic and slightly macabre artwork comes from? Does it comes from mediaeval tradition? There is no doubt that irony and sense of humour is a distinctive attribute of Spanish design (and typography). This kind of wrapping artwork has been very popular in Spain for as long as I can remember. It also is present at fishmonger’s and bakeries, but the nicest samples – and the funniest – are to be found at the butchers.

Ephemera Graphic Design
Back to blog