With the country economically ravaged and politically repressed in the aftermath of the Civil War, the obstacles facing Spanish designers and printers in the 1940s were immense. But as Andreu Balius shows, one man found his imagination stimulated by adversity, and responded by producing a new visual language that was both extremely beautiful and highly practical.

SuperVeloz, the creation of Catalan printer and typographer Joan Trochut, was a modular system conceived as a response to problems imposed by Spain’s post-Civil War economic malaise. But far from being just a useful tool for small printers, it could be considered as one of the most interesting experiments in early modern type design of the first half of the twentieth century.

In Spain, there was no native avant-garde movement, but there were significant individuals – artists, writers, architects and intellectuals – who were in sympathy with its ideas and sought to disseminate them through their own work. The poetry of Joan Salvat- Papasseit and Josep Maria Junoy showed clearly the influence of Futurism, while Dadaism had also spread within Spain thanks to Francis Picabia in Barcelona and his magazine 391. Rationalism arrived through a group of young architects who were influenced by the key figures in European architecture such as Le Corbusier and Walter Gropius. Jan Tschichold’s New Typography made its presence felt in some Spanish architectural and art magazines published during the 1930s, such as A.C. (Contemporary Activity Files) Art magazine and D’aci i D’allà.

Modernist concepts had therefore reached Spain by the end of the 1920s, and these new ideas spread with vigour during the years of the Spanish Second Republic, just before the outbreak of the Civil War in 1936.

The end of the war in 1939 and the triumph of General Franco closed Spain off from external influences for a long time. But fortunately, not all the graphic artists went into exile; some chose to stay, not an easy decision for those who had previously been involved with the avant-garde. The kind of experiments with type design which were undertaken by the Bauhaus and modernist artists emerged within Spain somewhat later, and with a different approach. One of the best, in my view, was the design, in the early 1940s, of SuperVeloz by Joan Trochut (1920–1980).

Trochut’s father, Esteban, had established himself as a printer in Barcelona in the early 1920s. His skills in printing soon won him recognition both from customers and from his peers. With his help, the Barcelona typefounder, the José Iranzo foundry, produced and distributed in the early 1930s a collection of geometric figures for type composition. The ‘Figuras Geometricas’ were very similar to those designs that Paul Renner produced for the Bauer foundry towards the end of the previous decade – the Futura Schmuck geometric figures. [1] They became very popular among Spanish printers for creating logos and letterheads, and for ornamental decoration; we could consider those ‘decorative’ geometric glyphs as a preliminary approach to the idea of a modular type system.

Imbued with the spirit of the printing arts revival that took place in Spain, particularly in Catalonia, in the first decades of the twentieth century and seeing the remarkable growth of advertising during the 1930s, Esteban Trochut was extremely concerned with maintaining standards of excellence in every piece of printed work, and worried about the quality and the status of both ephemera and commercial printing. To publicise his views on how printed work should be done and how typography should be used, he published a series of books: the ADAM volumes. [2] These books featured a diverse range of printed examples that Trochut believed could be used as models for good printing and as reference for good typography. The publications themselves, printed in Spanish and French, also served as promotional items for his own company. He saw them as manuals for the “study and rationalisation of typographic arts”, and emphasised the use of type as the main element on the page.

Both Esteban and Joan Trochut contributed articles on typography with the aim of challenging and promoting the use of creative typography among printers, and to further professional knowledge of the possibilities of the printing press. We can see reflected in their writings the ideas of ‘New Typography’ that were slowly being absorbed by the local printers. However, although we can detect the spirit of modernism in their approach, the ADAM volumes and the later NOVADAM editions were more practical manuals than a medium for spreading theoretical ideas. The first NOVADAM [3], published just before the outbreak of the Civil War, included some examples of the use of modules for the creation of glyphs and ornaments. The idea of SuperVeloz was clearly already in Joan Trochut’s mind before the war began.

In 1940 the Trochut family, like most other professionals who remained in post-war Spain, restarted their business under very difficult circumstances. Franco’s victory imposed an autarchy on a Spain economically ruined by the conflict. For printers it was now difficult to renew machinery, find good quality paper or buy new materials, in addition to the political repression and censorship imposed on the graphic arts and printing offices. Budgets were very small and resources limited, a challenge for small printing offices trying to execute work with any thoughts of originality.

Concerned about the need to improve standards under these taxing conditions, Joan Trochut turned to those ‘geometric figures’ that were still in use, and with his father’s help worked on a modular type system that could increase printers’ creative options. The result, SuperVeloz, was his personal response to Spain’s economic crisis – an experimental type system based on a set of modular features that when combined made possible a huge range of typefaces, alphabets, ornaments and even illustrations.

The SuperVeloz system comprised three principal collections, two sets of accompanying features, a so-called ‘Universal’ collection, a 36-point size collection and a set of modular flourishes – in total more than three hundred modules that could be reduced to fourteen basic designs (principal stems) and their ornamental derivatives (complementary features) with the other combining figures (secondary stems) and flourishes. [4]

Each character was a glyph, a component of a letter, rather than a complete letter in itself, which could be combined with other characters to produce custom-built letterforms. Trochut had pushed Gutenberg’s movable type onto a new level.

A nearly infinite number of possible combinations therefore offered printers an enormous range of typographical solutions, an absolute godsend at a time when they had no capital other than their own skills. The versatility of this system allowed printers to develop their own alphabets and lettering, design logos and create illustrations. The use of colour when combining all these figures also played an important role, since lead type modules could of course be printed with different inks. 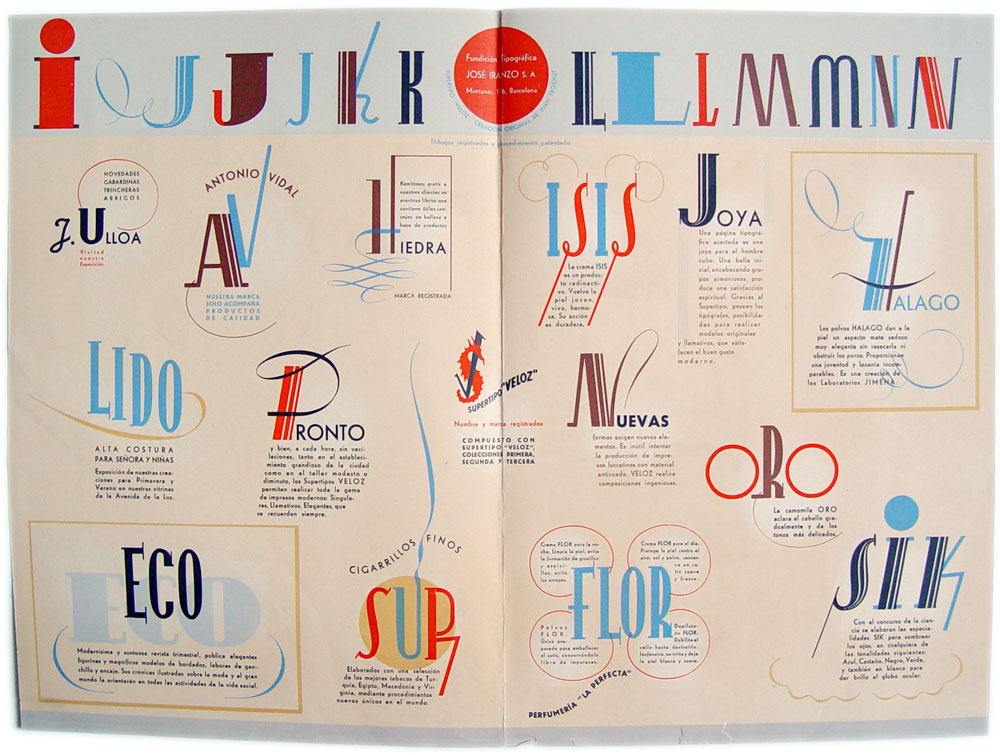 SuperVeloz was produced in metal in 1942 by the José Iranzo Type Foundry. As a promotional brochure described it: “Joan Trochut’s SuperVeloz is a collection of combining metal figures designed to meet the need for decorative type and for the demands of advertising.”

All these possibilities were showcased to remarkable effect in the issues of NOVADAM that were published after the release of SuperVeloz, ‘how-to’ manuals for using the system in a contemporary style. The Trochuts used NOVADAM to illustrate how Superveloz could be imaginatively employed, while at the same time promoting its sale.

We could therefore consider SuperVeloz as a product of Spanish modernism. Trochut had taken into account those experimental typefaces derived from the Bauhaus years, and mixed architectural functionalism with a personal taste for ornament. [5]

In the late 1990s, a faithful revival version of SuperVeloz has translated its combining metal shapes into digital outlines for font production. [6] Alex Trochut, the grandson of Joan Trochut, has collaborated with me, studying original type specimens and pieces of printed material in order to revive the memory of his grandfather, nearly forgotten since his death in 1980.

To further the use of this new digital version of SuperVeloz, a website challenges cyber visitors to play and explore its possibilities. Superveloz.net [7] is a playground that gives everyone the chance to create lettering illustrations by combining these modular designs.

Designed in the austere years after the Spanish Civil War, Super Veloz was a child of its time, the result of one man’s response to modernism, and at the same time a solution to the immediate problems of the printing industry in Spain.

1. At the beginning of the twentieth century and during its early decades, there was a strong influence of German typography in Spain. The main Spanish type foundries were run by German families who had established their businesses in the nineteenth century: the Richard Gans foundry in Madrid and Fundicion Tipográfica Bauer (as successors of Jacob of Neufville) in Barcelona.

3. NOVADAM was a new series of volumes published by both Joan and Esteban Trochut between 1936 and 1952 as a continuation of the ADAM series.

4. According to Trochut, “these basic designs, which are themselves the stems for the letters, are meant to be combined with all the secondary features”. All the designs were intended to be combined, so they retain a common sense of unity by their weight and proportion.

5. It seems that young Joan Trochut wanted to instill, with the design of a whole range of flourishes and decorative modules, a humanist feel as a counter to the rational approach and loss of ornament that was a feature of early ‘geometric’ modernist type designs. It is this ‘nostalgic’ approach to ornament and local culture that connects both Esteban and Joan Trochut with the Grafia Latina movement in Paris in the early 1950s.

6. The digital version of SuperVeloz was awarded an Excellence in Type Design Award by the Type Directors Club (New York, 2005). SuperVeloz is now available through the foundry TypeRepublic.

7. The website www.superveloz.net has been designed by Andreu Balius, Alex Trochut, and programmers Inklude studio and Flan.