Super Veloz is the collection of the type modules created by Joan Trochut and produced at José Iranzo foundry in the beginning of the 40’s, in Barcelona. This modular system was digitalized and revived by Andreu Balius and Àlex Trochut in 2004.

SuperTipo Veloz, produced in 1942 by Fundición Tipografica Iranzo (Barcelona), is a collection of combining figures, presenting itself as a real solution for the designing of small printed papers, from logotypes to single letter caps.
Joan Truchut describes his type system as a typeface ‘strictly integral’. It really conceives typography to its modular original concept. With SuperTipo a piece of metal does not refers to a character but a part of it. Different characters can be build combining diferent pieces of SuperTipo Veloz: Principal stems where ‘secondary shapes’ are added (more than 200 diferent module designs).
Versatility of this system allowed printers develope their ideas without the constraints when working with pieces of lead type.

The family also includes the SuperVeloz Fauno and Marfil Caps to be used for dropcaps, logotypes and letterheads. 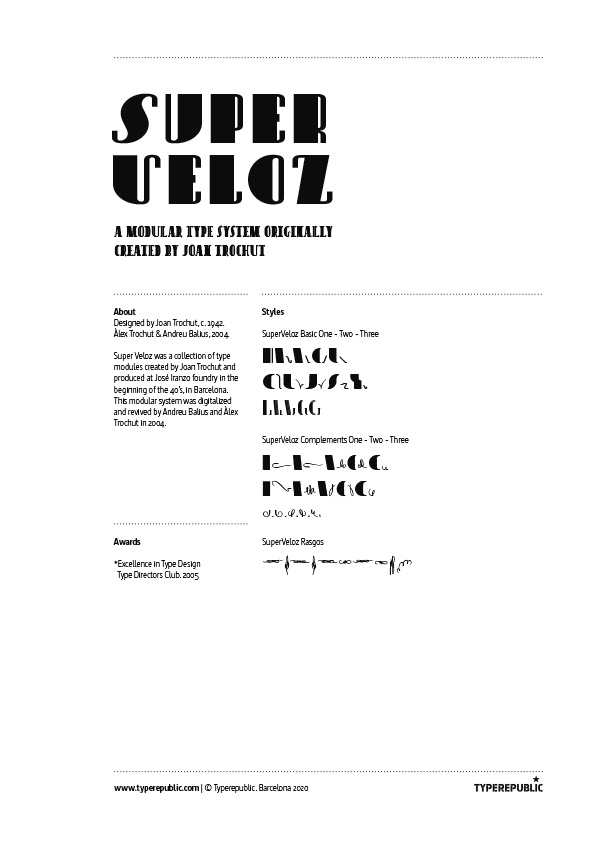 SuperVeloz is a set of modular shapes intended to be combined themselves. So you can build up any letter in any language. Also, you can create illustrations and symbols. It depends on your creativity and excitement.